Our team consists of experienced individuals, engineers and designers who between them have a wealth of experience in the cycle, trike and motorbike industry. 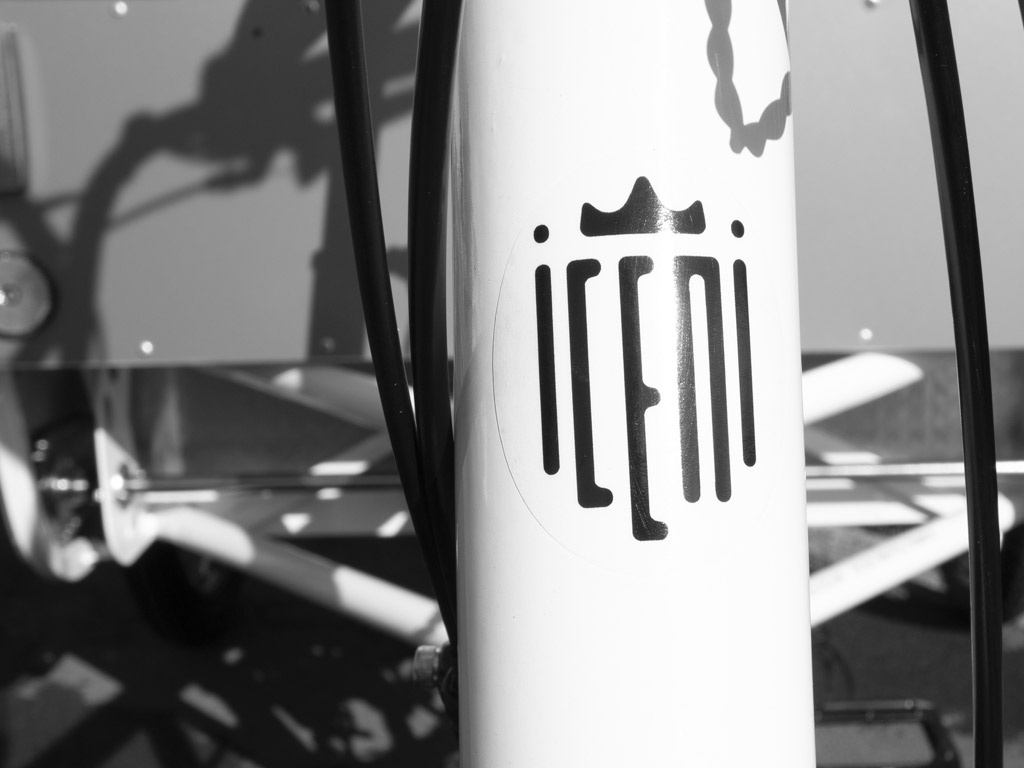 The Iceni Cycles trike was created following many years of involvement in the cargo trike industry. The desire to create a smaller, lower, nimbler trike was achieved in just six weeks! Built-in toughness was also a no-brainer for us.

The low-load carrying platform was achieved by dropping the load bay below the rear wheel centres: By removing the common through axle and powering each rear wheel separately we created more room and a much lower centre-of-gravity.

The legendary handling came from using a small front wheel and easy-handling geometry to allow the rider to steer in tight circles but also be also provide safety at speed.

This Mark One Iceni weighed just 40kgs with powered versions conforming to UK regulations by weighing less than 60kgs. Despite being svelte, and very pretty, these trikes were still, capable of carrying up to 250kgs! Many of these original Mk 1s are still in use today bearing testament to their original holistic design.

We made the rigid cargo box part of the chassis too so that it bore some of the load. This ‘monocoque’ feature saved weight and complexity compared to a ‘bolt-on’ box design.

Early customers were devout last-mile couriers, out there doing the right thing. It’s great that all these companies are still very much in business today. We worked closely with these street warriors and listened to their suggestions learnt from their daily toils. This collaboration paved the way for us to build a trike for those who rely on the trike’s reliability as an everyday workhorse.

As the UK slowly woke up to local carbon-free delivery the demands on these early last-mile couriers increased and the original trike was worked hard. Daily rounds of up to 60miles/95 kilometres with heavy loads announced the inevitable transition to a more powerful, heavier vehicle.

When the Mark Two Iceni came along it brought with it added power and a proportionately stronger chassis. We continued to use aircraft quality steel in all crucial areas and massively boosted strength with larger diameter tubes at the front of the trike. Original hand-fettled tubes morphed into laser-cut precision and previous dreams of up-scaling became reality.

Europe was ahead of us with urban logistic trends, and we eagerly awaited a cargo-bike designed motor that also boasted incredible, but legal power. In sympathy to these more powerful motors we found large, powerful, and very reliable batteries.

The Iceni Cycles E-Trike continues to develop, as does our aim to produce a vehicle that is sustainable, reliable, and affordable!

Dennis is a family man with six children to his credit, presently lives on a boat of his own making.

Highly respected in his field, Dennis can design, fabricate and weld almost anything, always in great demand but dedicated to the success of Iceni Cycles.

A short 2 year break with the Royal Mail as a postman before returning to an engineering role with an Environmental Water Purification company, six years travelling the UK installing and servicing various complex equipment.

For the past 20 years has lived on the Inland Waterways of England on a traditional barge, dedicated to a small carbon footprint and putting something good back into both society and the environment.

Adam was instrumental in the start up and success of the Bath Bike Workshop, a social enterprise and homeless initiative by Julian House of Bath. Donated bikes by the public are refurbished and sold on at a small profit to enable the social enterprise to train and empower homeless individuals on to a brighter future.

Also piloted camera trike’s for two Sport Relief fundraising challenge’s with both John Bishop and Davina McCall along with Dennis.

A former valued employee of a World renowned Bath based Trike manufacturer whom assisted with the production and general running for nearly 6 years.

Adam and Clare met on the waterways of England, sharing their boat with a loyal Hound and a ship’s Cat.

Clare has had a wide variety of careers including event organising and charity fundraising, 20 years working for the homeless as both a case worker for the Big Issue and case work co-ordinator for Julian House of Bath and 4 years as a Senior lead for substance missuse.

When not at work you can find Clare walking the hills & byways of England or digging up potatoes on her allotment.

Mother of two boys & partner to the afore mentioned Dennis this is truly a family business.

Phaedra has a past career of administration in a large railway equipment manufacturer, was a fund raising manager for the highly regarded Whale and Dolphin Conservation Society and spent some time on the World famous Rainbow Warrior operated by Greenpeace.

Richard was a freelance writer for Future Publishing’s Cycling Plus throughout the 90s and early 00s and also designed the unique Caribou Road Mountain Bike and RaceLite road bikes.

Liam has a background in telecommunications, home automation and security products.

His technical engineering background includes electrical and mechanical engineering, which is an ideal platform for the design and manufacture of the wiring harnesses and assisting in building the trikes to a very exacting standard.

Liam is an enthusiastic photographer, capturing subjects predominantly in wildlife, nature and anything that will stand still long enough. Photography whilst scuba diving brings awareness of the health of the oceans.

Liam is fondly known as a test pilot for Iceni, due to being with the company for a couple of years, he is able to critique the handling of the trikes as if it where a prospective client riding for the first time.

Developed in liaison with couriers, our powerful e-Cargo Trike can be relied on to work all day in safety and ease.

A versatile ‘flat-bed’ trike for large and bulky loads. Build your own retail unit, the possibilities are endless.

Designed to carry wheelchairs users in safety and comfort this versatile trike is a life-changer for many.